This weekend, the price of Bitcoin is making its way upwards to $34,500, but this has been on the back of even lower volume than the declining trend, given that it’s Saturday. Bloomberg is currently looking at a key trendline that acted as a support for BTC price but is now struggling to break above. This flip, according to them, would be a bearish outlook unless prices can retake the barrier. Originating at the March 2020 crash, the trendline acted as support as recently as May, when the cryptocurrency fell to about $30k. But to trader CL of eGirl Capital,

“The way ppl are positioned make me feels like we’ll never break sub 30k in a meaningful way (as in nuke to mid 20 and remain there).”

Meanwhile, despite the leading cryptocurrency still down about 48% from its all-time high in April, it is still up 19%, much better than gold, the stock market, or the US dollar. Bitcoin’s sideways action is happening at a time when the US dollar is showing strength, keeping above 92 level. With this, US net shorts have fallen, for a second straight week, to their lowest level of $10.44 billion since April. https://twitter.com/jbutterfill/status/1410918564249358338 Meanwhile, in the futures market, indicators have bounced from recent lows, but a proper sentiment reversal is still not in sight. In the week ended June 29, Bitcoin net shorts fell to 1,345 contracts from 1,528 the previous week. When it comes to premium on major futures contracts, not much has changed, with those expiring at the end of September trading at a few hundred premium while the one with the December expiry has a premium of about $1,000. The increase in OI is also marginal. Trader CL said,

“BTC and ETH basis also look relatively bullish, as in I feel like a meaningful break sub 32k and we may start seeing consistent backward, which isn’t v likely since I don’t see a strong reason why this market should trade backward atm.”

https://twitter.com/CL207/status/1410856684755427331 As basis trade, the difference between spot and futures prices collapses, hedge funds are closing their positions and are back into cash. $200 million hedge fund, Nickel Digital Asset Management, run by Goldman Sachs and JPMorgan alumni, is one example. This was to be expected amid signs that institutional investors are increasingly interested in the assets, said Anatoly Crachilov, the co-founder and the chief executive of Europe’s biggest regulated crypto hedge fund. Crachilov said in an interview,

“June will be remembered as a cash-rich, wait-and-see month.” “The sideways market conditions throughout the month led us to exercise financial discipline and keep powder dry until risk/reward of re-emerging market opportunities warrant efficient deployment of capital.” 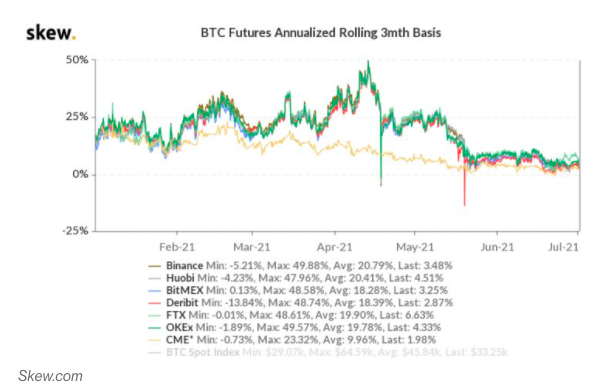 According to OKEx futures data, BTC long/short ratio shows buying interest after it recovered last Friday and held up relatively well this week despite the recent price slide. BTC margin lending ratio, which jumped to as high as 4.39 this week from last Friday’s 1.53 and is now at 2.82, also shows retail has started buying again. Not to mention, a bill in Germany has taken into effect that indicates at least $13 billion in inflows, based on PWC hedge fund survey data from May. This is coming while banks are charging 0.5% on deposits. Crachilov said,

“The investment world has dismissed crypto on every leg down for the past decade, thus far to their detriment.” “The most recent drawdown is ‘business as usual’ for anyone long enough in crypto business and with familiarity with Bitcoin’s polemical history.”

3 reasons why traders want to buy the Bitcoin price dip to $58.5K