When China banned Bitcoin mining in May, plenty of crypto natives scoffed—and not just because China’s tried and failed to ban crypto before.

The mining rigs would be loaded up and shipped elsewhere, they said, because the beauty of decentralized networks is that they’re borderless. Crypto finds a way.

But the miners that arrived in nearby Kazakhstan have overtaxed the country’s power grid so much that the government has gone from welcoming them to capping consumption and sourcing auxiliary power from Russia, according to a recent story in the Financial Times.

From the start of the year to August, Kazakhstan has gone from accounting for 6% of hash rate on the Bitcoin network to 18%, according to the Cambridge Bitcoin Electricity Consumption Index (CBECI). That makes it the country with the second largest presence on the network behind the United States, at 35%, and leaves a sizable margin between it and Russia, at 11%. 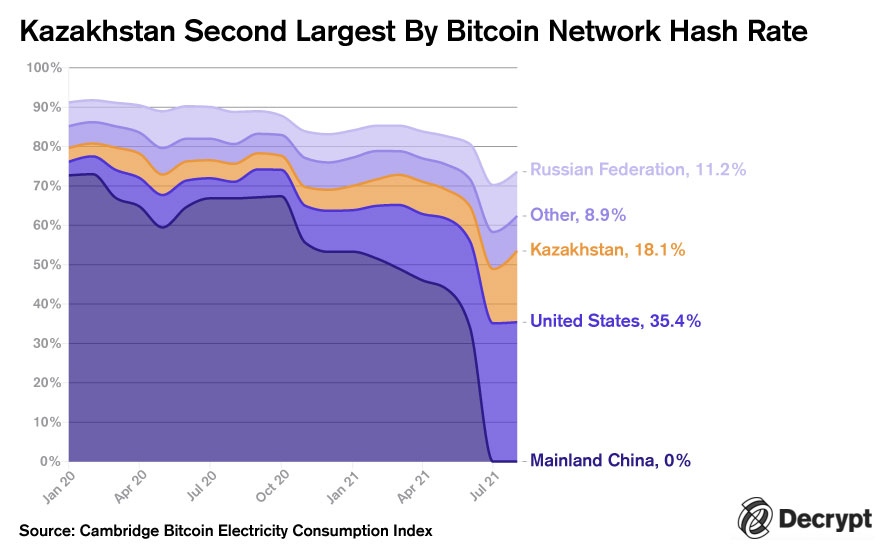 But even that figure falls short of capturing the magnitude of how much crypto mining has picked up in Kazakhstan.

Since the CBECI last released hash rate estimates per country for August, the total network hash rate has increased by 43%. It fell dramatically as mining rigs went offline following the China ban and has steadily climbed back to where it was in April.

Even if Kazakhstan’s share of the network has remained the same since August, it would have gone from 19.7 terahash per second (TH/s) to 28.2 TH/s.

To put that in context, a 2,500-rig mining farm like the one crypto mining service Xive had to recently shut down in south Kazakhstan would have generated roughly 57,500 TH/s if it was using the popular Antminer rigs. The hash rate increase from the start of August until now is the same as building 147 more facilities that size. 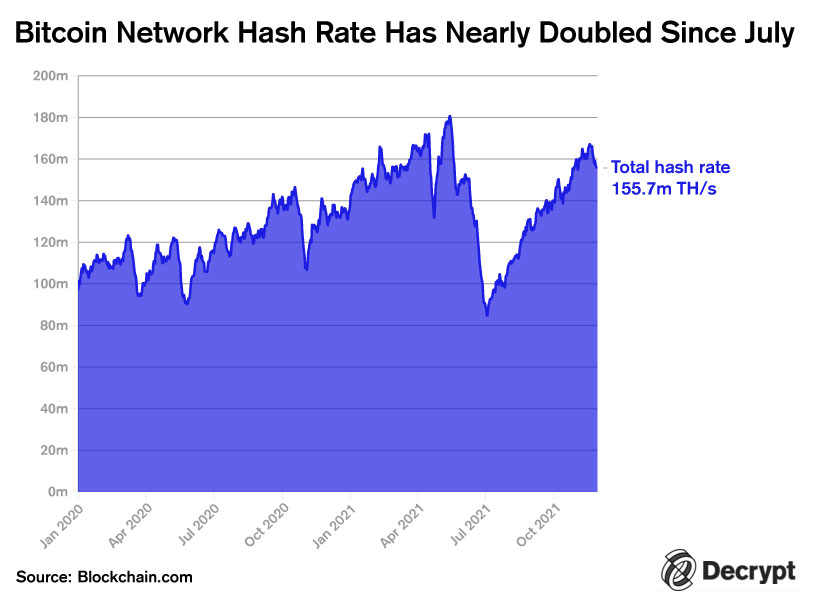 From what Xive co-founder Didar Bekbau said in an October livestream with Compass Mining, the writing has been on the wall for a while. Miners in the country were already starting to disconnect from the grid because of electricity shortages.

So it wasn’t much of a surprise when, last week, Bekbau posted on Twitter a video of a shipping container being packed up with the last of the company’s south Kazakhstan mining rigs, saying Xive was shutting down its mining farm.

Little sad to shut down our mining farm in south KZ. Last container is ready to be sent. So much work, people, hopes are ruined. Country risk played out pic.twitter.com/J8ZMg6GeUI

It’s the risk of chasing cheap energy prices, even in a country that’s previously been welcoming of the crypto mining community.

Kazakhstan has historically produced twice as much power as it consumes, according to non-governmental organization International Energy Agency.

The country’s energy prices averaged $0.04 per kilowatt hour (kWh) in March, according to GlobalPetrolPrices. That’s half what electricity cost in Mainland China at the time, $0.08, and one-third what it cost in the United States at 12 cents.Kazakhstan Struggles to Bear Weight of Exiled China Bitcoin Miners

The country has been expecting crypto mining to add $1.5 billion to its economy over the next five years, according to the country’s National Association of Blockchain and Data Center Industry. But the organization says it’s very aware that a large portion of crypto mining companies aren’t properly registered.

“The figure of 98 billion tenge [Kazakhstan’s native currency] is just an economic effect from companies that are officially involved in mining,” association chairman Alan Dordzhiev said in a statement at the start of November. “If we take into account ‘gray’ miners, then this figure can be safely multiplied by two.”

Bitcoin Mining At Home: Trend To Watch In 2022